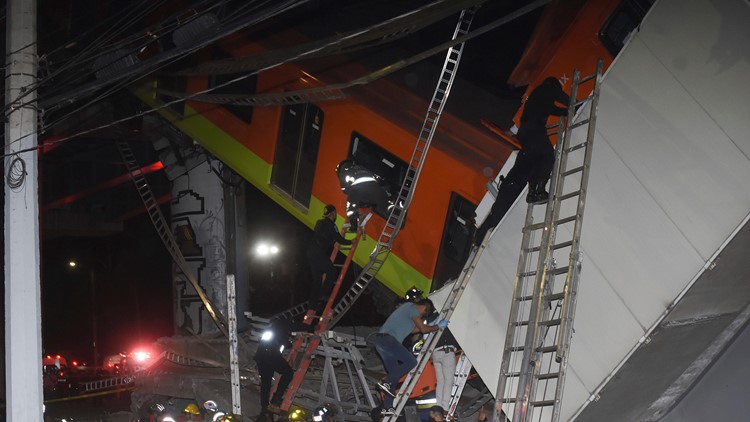 Train cars on an overpass in Mexico City crashed onto cars below when the overpass collapsed Monday night.

An overpass in Mexico City’s metro collapsed Monday night, sending a train plunging toward a road, trapping at least one car under rubble and killing at least 15 people, authorities said.

Mayor Claudia Sheinbaum said 70 people were injured, with 34 hospitalized, according to preliminary figures.

Video showed at least one broken train partially suspended and a car trapped under rubble, with dozens of rescuers searching through wreckage. The overpass was about 5 meters above the road in southern Mexico City.

“A support beam gave way,” Sheinbaum said, adding that the beam collapsed just as the train passed over it.

Rescue efforts were briefly interrupted at midnight because the partially hanging train was “very weak” and a crane had to be brought in. There were still people trapped inside the train, though “we don’t know if they are alive,” said Sheinbaum.

One video, which appeared to be from a surveillance camera, showed the collapse as it happened.

The accident happened on the metro’s Line 12, the construction of which has been plagued by complaints and accusations of irregularities.

“What has happened on the metro today is a terrible tragedy,” tweeted Mexican foreign minister Marcelo Ebrard.

Travis Pittman contributed to this report.